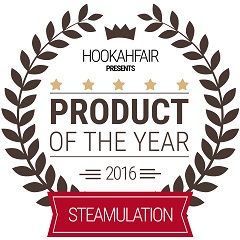 Best hookah. A successful start of the fair. Steamulation can look back on a successful trade fair premiere at the Hookahfair meets VaporFair 2016 in Frankfurt. From 15th to 17th of April, Steamulation was one of many manufacturers who presented its hookah products to the international trade visitors and consumers – and it was special: after three days, filled with loads of visitors, many product presentations und innumerable smoked hookahs, Steamulation was announced as the best hookah – the product of the year 2016. The Steamulation hookahs convinced the judges in all categories and therefore with perfect quality, design and technique!

Additionally, to the award “best hookah” from the judges, the Steamulation team is also happy about the big interest and enthusiasm of the huge number of visitors. In three days of the fair, hundreds of passionate hookah smokers visited the Steamulation booth, which had a delightful ambience with all Steamulation hookah models – including the Superior Gold and Steamulation Exclusive waterpipes. The products not only stayed in the showcases: Every visitor had the opportunity to get their hands on the hookahs in our lounge and could try them out for themselves on site to get a feeling of their own Steamulation experience. Furthermore, the hookahs were ready to be explored in every detail while being conveniently smoked. Therefore, the innovative Steamulation hookah technologies advantages could be proven: The 360° rotatable SteamClick 360 connection system, which doesn’t need traditional threads to be connected and instead uses a click-system, could be effortlessly used to smoke the whole days through all four hose connections. Simultaneously the integrated valve technology – the Advanced Closed Chamber System – cared for a perfect airflow and flavor despite the multi-hose connection. Smoking different tobacco flavors was very well received so that one bowl after another permanently had to be prepared. The testers of our waterpipes were thrilled – what last but not least could be seen on the tobacco and charcoal usage. Even so our team, which had lots of different conversations with the visitors. The award as the product of the year was the highlight of the last day of the (already successful) – hookah fair. The CEOs of Steamulation were very proud to hold the trophy in their hands and so they addressed huge thanks to the audience. At this point, the whole Steamulation Team must thank you very much for the support of all visitors as well as for the judges who voted for us to have the best product of the year 2016!

OUR PRODUCTS
Scroll to top